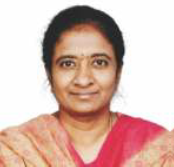 Dr. R. Vasantha, a gold medal list in academics, has over 20 years of work experience in extension and teaching. She is adept in organizing training programmes, demonstrations, on farm trials, frontline demonstrations, minikits, exposure visits, field days and exhibitions for the rural clientele. Extensively authored popular articles and press notes for the benefit of farming community. She acted as resource person in many capacity building programmes for officials of Department of Agriculture, Andhra Pradesh. On behalf of Agricultural University, she served the farmers of several districts of Telangana viz., Sangareddy, Rangareddy, Nizamabad and Mahabubnagar  through DAATTCs and KVKs. During that time, many of her Radio & TV programmes on farm topics were widely broadcasted and telecasted in local language. Played an active role in the development of Mandal Wise-Farming Situation Wise Plans for all the Agro  Ecological Situations in Rangareddy district of Andhra Pradesh for which she has toured and interviewed farmers extensively for a period of 2 years, which helped her to have critical insights on farming issues, strengths, weaknesses, opportunities and threats of various farming situations.

Dr. Vasantha has also worked as a master trainer for training mandal  level and divisional level officers of various allied departments of Agriculture in the districts she has worked and subsequently developed SREP under ATMA for Rangareddy district. In her 10 years of teaching experience, she helped to mentor research works of 19 Post Graduate and Doctoral degree students belonging to Kerala, Andhra Pradesh, Telangana, Andaman and Nicobar islands, Uttarakhand, Bihar, Nepal etc as major and minor guide in key out reach are as such as innovation decision process, adoption and diffusion, agro biodiversity, SWOT analysis etc. that focussed on pressing rural issues viz., SRI paddy, Bt cotton, farm mechanisation, tribal and migration issues.

She authored and co authored 60 research articles, among which two were presented at international conferences held at Harvard University, USA (2013) and ICESS at Bangkok, Thailand (2017). She acted as external referee to several journals. She played an active role as member of Village Adoption Programme of Agricultural College, Rajendranagar for a significant period of time. She authored several reading materials and practical manuals for agricultural students at different levels of academics. She has discharged her duties efficiently  as Officer-in-Charge, student affairs and as a ward enduring her tenure at Agricultural College, Palem.

In the year 2012 she has authored a text book for UG and PG students of Agriculture titled“ Extension Education: New Horizons” published by Kalyani Publishers, New Delhi, India. Delivered guest lectures on farmers innovations in System of Rice Intensification(SRI) at Cornell University, Ithaca, USA and on Outreach activities of PJTSAU (formerly ANGRAU) at Centre for Agriculture, University of Massachusetts, Amherst, USA. She visited University of Massachusetts, AMHERST, USA with the capacity of visiting Professor during the year 2013.

At EEI, Rajendranagar she is actively involved in training Middle Level Extension Functionaries belonging to all South Indian States and Union Territories in areas of out reach management and ICTs. Brought a compendium on “Bringing about change:  Inspiring success cases of rural women of Southern India” played a leading role in institution of EEI blog, e-brochures as incharge of EEI News letter. She has  played an active role in skill training of budding young entrepreneurs in AESP programme of  GoaI   in the year 2019. Her areas of specialization are Farmers Indigenous technical knowledge, team building, Management games communication  and Digital technologies.