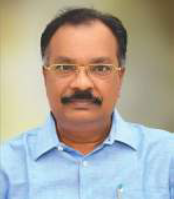 Dr . I. Sreenivasa  Rao has put up 26 years of experience in the areas of teaching, training, research and extension. He has started his career as Assistant Extension Specialist in 1993 at Fruit Research Station, Sangareddy where he was involved in conducting several extension activities for technology assessment and refinement besides handled RAWEP for Horticulture students.

Later in 1996 shifted to AICC & ANGRAU press and involved in production of farm literature besides being Research Editor for the Journal of Research, ANGRAU. In 1999 promoted as Associate Professor and joined as Training Organizer and Head, KVK, Rastakuntubai where conducted several on and off campus vocational training programmes to the tribal farmers of Vizianagaram and helped them to adopt modern farm technologies through front line demonstrations. One of the significant achievements in KVK was the documentation of valuable Indigenous Technical Knowledge of Tribal

farmers and facilitated them in receiving national recognition and cash prizes for exploring the best ITKs. In 2004 was transferred and posted as Deputy Director of Extension in Directorate of Extension, ANGRAU, where he was involved in overall management of all the KVKs of university and different projects of state and central governments. In 2008 was promoted as Professor and posted as Professor and Head of the Department of Agricultural Extension, College of Agriculture, Rajendranagar,   Hyderabad, where he taught undergraduate, post graduate and Ph.D. students and guided 14 doctoral and 15 M.Sc. students as Chairman of advisory committee. Later, joined EEI in February, 2018 and promoted to Senior Professor on January, 2019.

Dr . Rao is a Fellow and Life Member of many extension education bodies of national and international repute. He was Expert Member, selection committee for ASRB, New Delhi and several SAUs. Widely travelled, Dr . Rao has visited China, Thailand, Vietnam, USA ,Canada, Indonesia, UAE, Netherlands and Singapore to deliver talks and attend conferences. He has been the guest faculty to many institutions and training centers specially dealt with the topics related to communication, adoption, personality development etc. He has 75 publications in reputed peer reviewed international and National journals, 20 popular articles and 2 book chapters. He is also one of the committee members of Broad Subject Matter Area Committees (BSMA), ICAR,  New Delhi for the discipline of Agricultural Extension Education and developed the new course curriculum for M.Sc and Ph.D. degrees in the discipline of Agri. Ext. Education.

As a student, he has an excellent academic record with a university gold medal in Ph.D. in Agricultural Extension. He is also recipient of award of “Excellence in Teaching” in Singapore conference, 2017 conducted by Scientific & Educational Research Society, India.